The Ray White Brighton team were proud to participate in this year’s Channel 7 Brighton Jetty Classic Swim which was held on Sunday 5 February 2017 down at Brighton beach. The Brighton Jetty Classic Swim is South Australia’s largest open water swim and street festival; held annually since 2006, with over 1000 entries to participate in the 1500m, 400m and the now included 100m family swim. The BJCS is more than just a swim it is day packed full of entertainment both on and off the beach. BJCS 2017 festivities included DJ entertainment, guest appearances from Home and Away stars, food trucks, stage events and cooking demonstrations by the MKR contestants.

Another attraction for attendees on the day was the inaugural Marilyn Swim which has been acrowd favourite since 2014 a   nd since its inception the swim has raised over $100,000 for Cancer Council SA being an additional way to give back to the community. It was a great day enjoyed by all including our very own Ray White representatives state CEO Mr Matthew Lindblom and Ray White Brighton Director Mr Scott Robinson who both participated in the Brighton Jetty Classic 1500m swim. Our very our own Scott completing the swim in just 33.56 minutes and Mr Lindblom coming in closely at a time of 33.58 it was a close one gentleman but definitely an effort to both be very proud of well done! 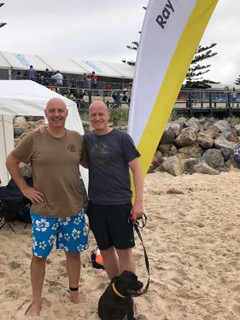 Bit of down time this Christmas? Why not add value to your home

Back to all news
Up to Date